What does the future hold for the urban forest? What is the urban forest? The term – like green infrastructure – suggests an integrated entity, perhaps collectively planned and managed. But most urban trees are in private gardens, not public spaces, and gardening is a personal, individualistic pastime, not a collective enterprise.

If the seeds of the urban forest are sown in a million home gardens, then we need to know how residents relate to garden trees. Let’s take a peek into the frontal lobes and back yards of our neighbours, and ask: why do we plant and remove urban trees?

In a series of new papers, Jamie Kirkpatrick, Aidan Davison and Grant Daniels from the University of Tasmania surveyed residents from Townsville to Hobart, to explore their motivations for planting and removing garden trees.

In one survey, over 650 residents filled out a questionnaire that listed over 40 reasons for planting and removing a tree. Respondents were asked to tick the reasons they agreed with. Reasons for planting a tree included: to improve the appearance of the house, reduce pollution, create a windbreak, and many more. Reasons to remove a tree included: to remove allergies or traffic hazards, to appease neighbours, and so on.

Why do we plant trees? 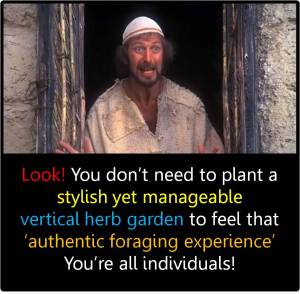 Only 2% of respondents in the study indicated that they plant trees for ‘fashion’ or to ‘conform to social norms’. Producers of TV garden shows will shout with glee at this statistic, ‘Yes! We’re all individuals. Now for a word from our sponsors’. Regrettably, for every two residents who do acknowledge the existence of social norms, there’s one contrary prick keen to oppose them: 1% of respondents approved of planting trees to ‘displease the neighbours’.

So much for the misfits, what’s #1 on the list? The top two reasons are aesthetic: we love to plant trees for ‘beauty’ and to ‘improve the appearance of the garden’. Our next favorite rationale is environmental, to attract birds and animals, and the fourth is functional and personal: to create private spaces.

Why chop trees down?

The big reasons are obvious: trees grow tall, branches die, and bits fall off. The most popular reasons for removing trees relate to perceived risks.

Big trees create the most worry, as the authors of an earlier study noted, ‘Danger is often encoded in the size of the trees, or more specifically the relativities of size between the backyard and the trees’ (Head & Muir 2005, p. 90).

We can’t blame tree removal on ‘folks who aren’t like us’ either, as the ‘propensity to remove trees was not affected by city, income, gender, birth in Australia or otherwise and tertiary education or otherwise’ (Kirkpatrick et al. 2013, p. 172).

Gardeners who like indigenous plants – but not those keen to save exotic heritage trees – may be pleased that residents are more inclined to remove exotic than native trees: 59% of respondents supported the removal of environmental weeds, and 17% supported removal of exotic trees, but only 1% supported removing a tree simply because it is native. (Nevertheless, big trees are likely to be removed regardless of their origin).

The University of Tasmania study (like an earlier study) shows that suburbanites love garden trees.

By far the most common response [to an open ended question] was ‘the more trees the better’ in city environments, although a qualification about the importance of ‘the right tree in the right place’ was also common.(Kirkpatrick et al. 2013, p. 169).

However we don’t love all trees, just some trees, in some places; and we remove the trees we don’t like with varying degrees of guilt and self-righteousness.

Quantitative studies like this show broad patterns and can obscure subtle complexities and variation between individuals. Most (if not all) respondents had many reasons for planting and removing trees. Nevertheless, the most popular reasons for planting a tree focus on beauty rather than practicality: ‘beauty is the outstanding perceived quality of garden and street trees’ (Kirkpatrick et al. 2012, p. 155). More people prefer to plant trees for flowers than for fruit or shade.

What about that urban heat island effect? Despite calls for more shady suburbs, many residents aren’t that keen on shady yards. Just over half of the respondents (55%) indicated that they would plant trees for shade. At the same time, 42% supported the removal of a tree if it ‘blocks light’ and 14% if it creates ‘excessive shade’. Many people probably ticked both boxes.

We urbanites are continually planting, removing and replacing trees. In the 5 years prior to the Kirkpatrick study, 70% of respondents planted a tree, 54% removed one, and most who removed a tree planted a new one. Based on these numbers, it’s easy to argue that we don’t have a problem getting trees into the ground. Many rural LandCare coordinators would kill for a 70% planting rate.

Nevertheless, the abiding feature of the urban garden is high turnover. By continually cutting and planting, we create an eternally youthful, ever-revolving urban forest. We ‘rejuvenate’ our gardens before trees grow old, and replace old big trees with new smaller species. We deny the influence of fashion and media, even though high turnover is embedded in the garden economy:

In the second half of 2009, the Australian garden nursery and garden maintenance industries alone accounted for a turnover of AUD 3.8 billion…. The increased economic importance of garden consumption has been accompanied by increased investment in tree-related advertising and significant growth in gardening content in popular media…. This market activity explicitly seeks to … promote novelty and changing fashion as mechanisms of sustaining the consumption of tree ‘products’ in the face of the longevity of many trees. (Pearce et al. 2013, p. 78)

Or, put another way:

… turnover of trees in the private urban forest is firmly linked to processes of capital accumulation, in everything from the selling of tree products and services to the buying and selling of urban real estate itself. (Kirkpatrick et al. 2013, p. 174)

As each house is sold and bought, the process repeats, as new owners plant and remove trees, ‘mark out [their] own territory’ (Head & Muir 2005, p. 91) and create their own personal space.

The future is small

Tree cover in Australian cities has increased over the past 50 years. Since most residents like trees, it seems unlikely that cover will decline rapidly in the near future; except of course where gardens shrink as properties are sub-divided and buildings expand.

Compared to many rural areas, the big problem in cities isn’t a shortage of trees, it’s a shortage of big trees and old trees. We value big old trees but – you know the acronym – N.I.M.B.Y.

This creates two challenges: how to save big old trees and how to grow big old trees. Most activity and legislation rightfully focuses on saving existing old trees. But, in the long term, this is a stop-gap measure. Like saving isolated trees in cropping paddocks. Many cities inherited big old trees from earlier times, before farms and large estates were sub-divided. Modern garden culture doesn’t create big old trees to the same extent.

Is there space in the city for big old trees? In parks and public spaces, most definitely, but not it seems in the frontal lobes or back yards of home gardeners. We must cling to the big trees we do have because we – and I mean we, not an abstract they – rarely intend to replace them.

Many thanks to Professor Jamie Kirkpatrick and Lilian Pearce for fact-checking this week’s post. This is the third in a series of posts on urban trees. The next post will look at trees and human well-being.

Head, L. & Muir, P. (2005) Living with trees – perspectives from the suburbs. In Proceedings of the 6th National Conference of the Australian Forest History Society. (Eds M Calver and others). pp. 84-95. (Millpress: Rotterdam). [The full article can be downloaded for free from this link].